Production brought to the next level with four HGG machines

A focus on continual improvement and innovation, performance driven attitude and pursuit of excellence. These are some of Civmec’s core values that define their company. “We are constantly looking for productivity and efficiencies within the business” facility manager David Power stated. With 45.000 tons of steel going through their workshop every year, it is important to invest in 3D profiling equipment that can live up to the company’s standards and values. That is why Civmec invested in four HGG machines in the span of two years.

“The output we can get from the 3D profiling machines and the quality of the cuts as well is fantastic”, according to David Power.

In September 2016, Civmec invested in their first HGG machine, the SPC2000 pipe cutting machine. Processing supervisor Norm O’Connel told us “The accuracy of the machine is spot on”. The company was very pleased about its result and invested in three more machines in the span of 24 months. Now the company is the proud owner of an SPC1000, SPC2000, PCL600 and RPC1200 which automates there cutting work. “The fit up is significantly less, because we don’t have to manually bevel plates, pipes or the beams. It is correct coming of the machine. It reduces the amount of man hours associated with fit ups for sure.” Mr. Power said.

Besides being very pleased with the 3D profiling machines, Civmec also has a lot of appreciation for the HGG service. They know that HGG is working in their interest and are there to optimize the customer satisfaction and fulfill the company needs. “They came here before we installed the beam cutting machine, RPC1200, they were here for about a week and they got familiar with exactly what we wanted before we installed the machine. As a result of that we got exactly what we wanted as well” David Power mentioned. “Nice people that we deal with on daily basis, very switched on as what Civmec actually wants, what we need from the machines, the product service has been very good.”

“With the implementation of the HGG machines we are able to cope with the plasma which is significantly faster and way more productive”
David Power, Facility manager 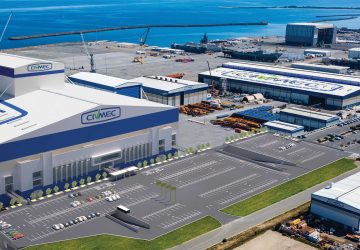 More about this machine

Civmec is very on-point when it comes to innovation to improve the company’s productivity and efficiency. That is why they have chosen to invest in HGG’s machinery. “Originally a part of the reason why we bought the RPC1200 beam cutting machine was, because we wanted to be able to bevel box sections, which we weren’t able to do previously”.

“The RPC1200 is a very good machine. We have utilized it on the end of our beam lines, so we got an automatic beam line. It gives us the ability to double bevel the flanges on the beams, which previously we were not able to do” Mr. Power proudly mentioned when talking about what the RPC1200 has brought into their business. “We had a gas project where we needed to bevel both sides of the flanges. Obviously, this machine was able to do it. We took initiative and put an investment into this machine, which we reached the rewards from.”

With two SPC’s running in their facility, the output became massive and made it able for Civmec to process the huge amounts of steel pipes going through their workshop. Mr. Power told us: “The SPC2000 is a fantastic pipe cutting machine, obviously with the diameter of the pipes we can cut up to 2 meters diameter pipes. We have a fantastic output from the pipe cutting machines SPC1000 and SPC2000, it has increased our productivity massively”.