Sprouted profile, mostly with an ‘end’ profiling shape (or none). 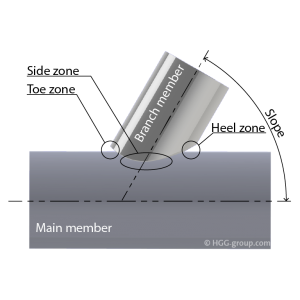 That portion of a walls end along the joint where the members approach closest to each other. In cross section, the joint root may be either a point (fit line) or a line (root face).

The cut face on a walls end along the joint root, parallel to the other connecting face after fitting. A technique to decrease weld volume and/or to create a mold for perfect fitting.

The separation at the joint root between the members after fitting. Technique to increase the joint penetration for stronger connections.

Zone in which one of the two welded faces of a connection will smoothly changes to fit to another face, to ensure an optimal weld preparation. In particular when the dihedral angle becomes too small or too large along the joint root. 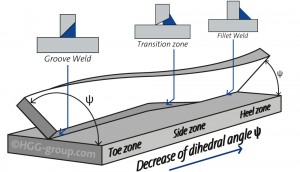 A length compensation of the member to correct shrinkage of the weld.

Angle between the connected outer faces of the members along the fit line. Essential to make calculations for optimal weld preparation.

The angle formed between a centre line perpendicular to the wall and the cut face of the wall. Equal to burn angle and can be negative or positive.

Angle between the to be welded faces of the members along the joint. Can be an inside or outside weld preparation angle. Also called ‘Joint included angle’. A groove angle for example, is a type of weld preparation.

The angle between the member walls along the joint root changes constantly (see picture below for a simplified view). This dihedral angle is greatest in the toe zone and smallest in the heel zone. On some joints, this dihedral angle differs considerably. In order to maintain a strong connection along the joint in these situations with a minimum of weld volume, it may be necessary to use a combination of weld types. 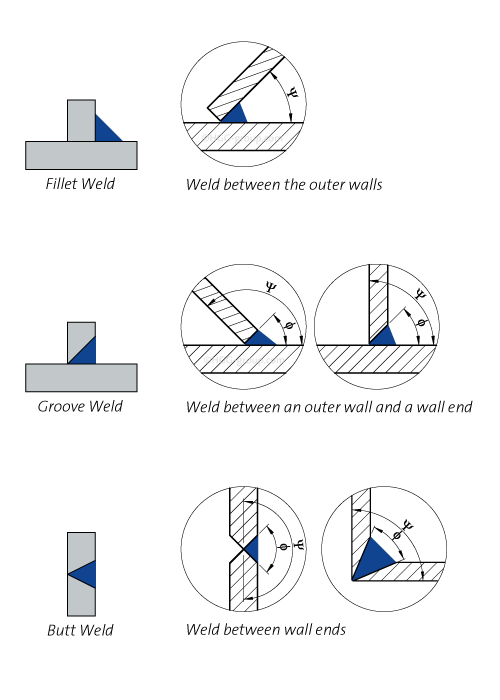 Did you learn a bit about welding terms? And do you want to be the first to read the newest articles?

The 7 Most Used Profiling Shapes for the Process Industry